In my mind, Ann Coulter lost a huge amount of credibility with me when she backed first Christie and then Romney, while ridiculing anyone who disagreed with her.

But for the most part, before this election season, she’s been spot on in many areas. Though I could do without her libertarian-hate.

But this article on the connection between the Democrat party and the KKK and gun control is choice. Click and read.

I spent last week visiting family in the Northeast US and, as usual, I drove, partly to avoid the gropers and imposters at the Terminally Stupid Agency, but also because, let’s just say that I like to bring a few ‘things’ with me legally secured in the trunk.

Well, since Virginia is better than most states regarding open carry and also honors the North Carolina CHL, I was still armed (doubly) by the time I pulled off the highway 30 miles south of DC for lunch and a bathroom break.

After consuming what sometimes passes as food at a well known fast food restaurant, I headed to the public restroom. For medical reasons that I’ll spare you right now, I need to use the public restrooms more than I’d like. Given the condition of some I’ve walked into, I sometimes would have preferred the woods and some leaves. I’m even stuck with using the stalls due to my condition.

Whenever possible, I am usually carrying one officer’s model 1911 in a SmartCarry holster, and a second full size 1911 on my hip in an OWB holster, sometimes covered (depending on the situation), sometimes not. At this particular time, I was wearing a sweater over the full size piece.

Again, due to my condition and the fact that I’m carrying two handguns, I typically seek out the handicap stall, since it has a nice hand rail that I can put to good use.

So I stepped into the handicap stall and close the door and…crap…the lock is broken. But it does close securely, at least, the lock being a separate push-button on this stall door. So, I take the chance.

I wonder if you can guess where this is going.

My routine is to take both spare magazines (with their mag pouches) for the full size 1911 off my belt and lay them on top of the industrial toilet paper dispenser, where they fit quite nicely. Then I take my full size 1911 in its holster off my belt and secure it between the handrail and the stall wall. It’s normally surprisingly secure, but in this stall, I was a little concerned that it might fall outward (but not through), as the fit was a little tighter. Nevertheless, after testing it a bit, I believed it was secure enough to hold it in place while I did my business.

Next step is to drop the trousers and pull the SmartCarry high up on my chest and rotate it so that pockets holding the gun and the spare mags are on my right side, out of the way. Just as I was about to do that…you guessed it…the door opened. Now, it would be one thing if this dude had just blurted out apologies and closed the door quickly, as an normal human would. But this guy, kept on trying to walk into the stall, where I was standing with my pants at my ankles, a gun plainly visible in a holster in front my crotch area, and another gun on the hand rail of the stall.

My stupidly polite nature kicked in and I said “Sir!” and gently pushed him out while I closed the door. As one friend said, I need to get in touch with my inner a$$h*le. This moron never even made eye contact with me. It was like this was normal for him. But he never even said a word, either, so I don’t think he was trying to bully me out of the stall. All I could think of later is that he must have been high on something.

I stood their in the stall, pants still at my ankles, hand on the butt of the gun in the SmartCarry, nodding my head in disbelief at what just happened, repeating “WTF just happened?” over and over again. I was more angry with myself for calling him “Sir” when some expletives were probably in order. But even worse was the realization that I was caught completely off guard in condition white, even after noting that the stall door lock was non-functional. (After the incident, I removed my belt and used it to secure the door to the handrail before proceeding with my business.)

So, yes, even when you are Pants Free ™, please remember not to get caught in condition white.

While reading the recent trumped up kerfuffle regarding Ted “The Nuge” Nugent’s comments that have earned him a JBT Secret Service investigation, I remembered an interview or three he’s done where he asserted “The Second Amendment is my conceal carry permit.” While I like listening to The Nuge speak to clueless and aghast lamestream media elitists and other collectivist subhuman monsters, I take issue with this point.

You see, even the black-robed tyrants affirmed that the right to keep and bear arms is not at all dependent on the Second Amendment, but precedes it as an individual, fundamental right. It is a human right.

As such, I am posting a photo of my conceal carry permit. Note that my right to keep and bear arms is not even dependent on this, as that would exclude those who have lost limbs or been born without, so for yourself, choose any part of your body (within limits, of course ;-)). The simple fact of my life is my conceal carry permit. 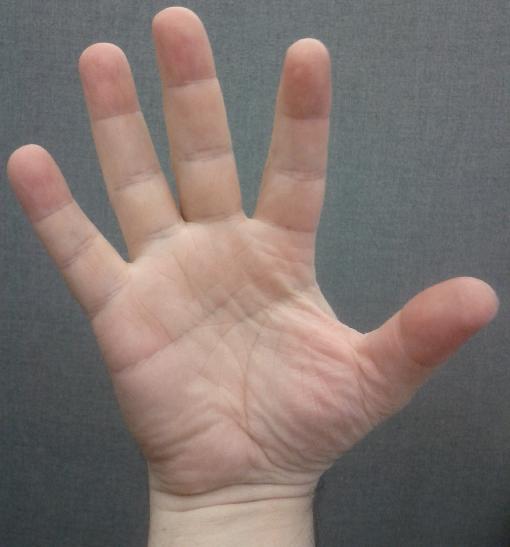 “The Second Amendment is my conceal carry permit” much like some open carry advocate groups like to say “Open Carry is the right, Conceal Carry is the privilege” may make good copy, but neither is true. The Second Amendment merely codifies and recognizes my right to keep and bear arms. And by what authority do supposed gun rights advocates assert that carrying concealed is not a right?

PS: I may be late, but I will be posting a review of my experience at the Appleseed shoot on March 24-25 with six other bloggers and several other folks. Also, I have a some pictures of a fun time I had with family, teaching a new shooter as well as a few friends of the family. And a rather funny “condition white” story.