This morning at the Appleseed RBC, we started the day off with the basics of signing in and setting up our shooting positions and then plunged into the first strike of the match, the second strike of the match, and the third strike of the match the last of which the Revolutionary War might never have happened without. Those events are the shooting of seven colonial militiamen (five of them one or the other of father and son) by the British regulars; the battle at North Bridge in Concord, where the regulars were quite surprised by the expert marksmanship of the colonialists; and the battle starting at Miriam’s Corner as the regulars retreated back to Charlestown, respectively.

One of the first things anyone interested in becoming an Appleseed instructor typically does is to pick up a copy of David Hacket Fischer’s Paul Revere’s Ride, where much of the historical information they teach Appleseed is taken from. I haven’t picked up my copy, yet, but I do intend to.

After lunch, we were able to commence with shooting, after a minimum amount of instruction. This is mostly to gauge where you are before they start teaching. We have a good mix of people who have been shooting all their lives, at least one service rifle competitor, some who have been to Appleseed shoots, others not, and even one from Wisconsin who just recently shot for the first time and bought his first firearm for this RBC. I suspect that in some cases, the guy with no shooting experience is going to do better than others in that he has no bad habits to break. I thanked the guy from WI for Scott Walker and for finally isolating Illinois by getting conceal carry passed in WI.

The first target we shoot is a “red coat” target, with four identical red shapes (the shape is roughly what you would see if someone was in the prone position shooting at you) in successively smaller sizes to mimic 100yds, 200yds, 300yds, and 400yds when placed at 25yds, which is the range most of the course of fire is at. There is also a small, one inch shingle of sorts that is supposed to mimic a 250yd head shot.

Today, I surprised myself and actually got the head shot on my first red coat target of the day and also managed to get all three shots in the 300yd red coat. 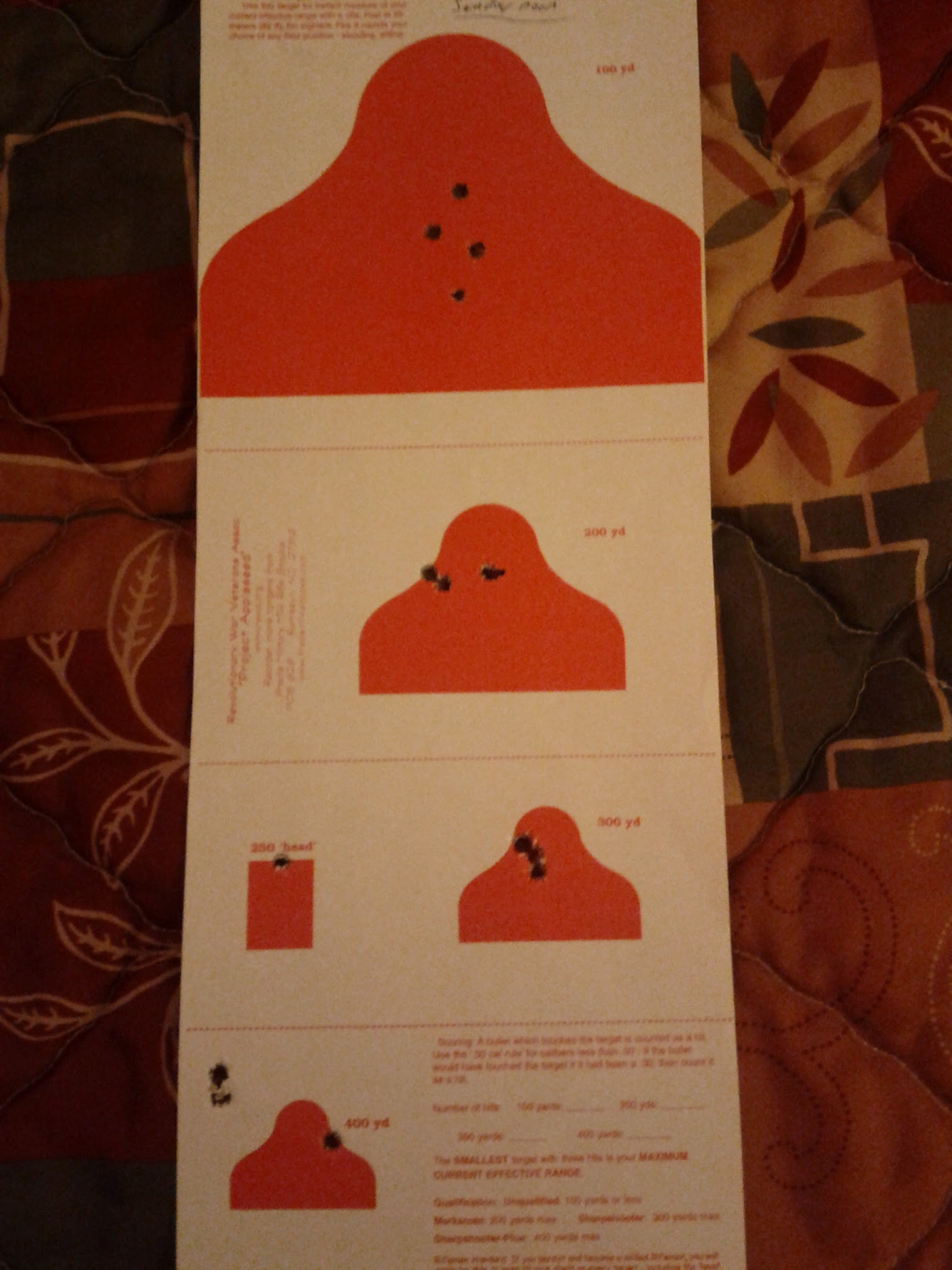 We then worked on the sighting squares (pictures will follow, tomorrow), and then went over the sighting in process (Minutes/Inches/Clicks, MOA, etc.). I did not have to sight Ruger 10/22 in, as I hadn’t shot but 50 rounds through it since the March Appleseed and it was still on target. Again, I surprised myself with more than one ragged hole in the five sets of five shots.

Well, at least the one on the bottom left looked like a ragged hole before I pulled it and laid it flat on the bedspread. Nevertheless, this is the best shooting I’ve done, yet.

Overall, it was a great start of the week. The weather was a perfect 75 degrees, which is going to be important early in the week as Isaac approaches later in the week. We hope to get plenty of time on the KD (Known Distance) range where we’ll get to shoot out to as far as 500yds.