[See update to previous post for some pictures of targets.]

The day started out with kind of dreary weather, but it didn’t take long for the sun to burn off the haze and even the humidity wasn’t too bad later in the day. It was, once again, around 75-80 with an occasional nice breeze blowing through the covered shooting area.

We started out with the red coat target again to check progress, and I was able to get three in the 400yd target, though I missed the head shot due to a failure to feed that I had to correct. 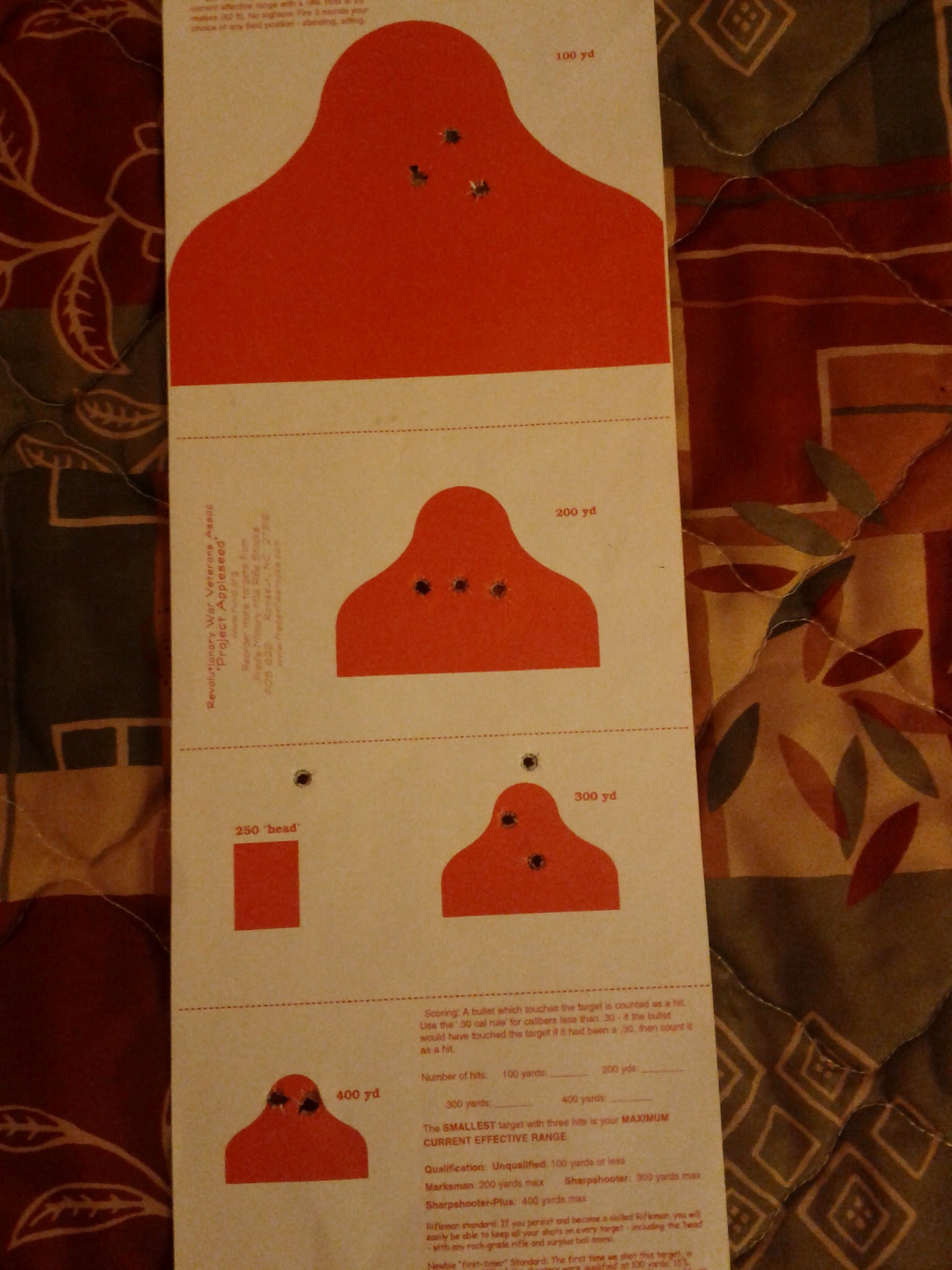 After shooting a few classifier AQT (Army Qualification Test), which is basically just practice for the AQT, we then shot AQTs for the rest of the day, seven in total, with occasional instruction early in the day. Maximum score is 250, and in order to achieve Rifleman, you need to score at least 210. I don’t have pictures of my actual targets, yet, as the instructors were hanging onto them to score them, but I was scoring right around 200, until I had a couple of failure to feed problems (more on that later). On my second attempt I scored 204, but I had under-loaded one magazine, so I only got off 39 rounds instead of the requisite 40. In all likelihood, I would have scored over 210 if I hadn’t made that silly, maddening mistake. No worries, though, as I did finally score a 219 on my fifth attempt, and even that was with three or four FTFs. 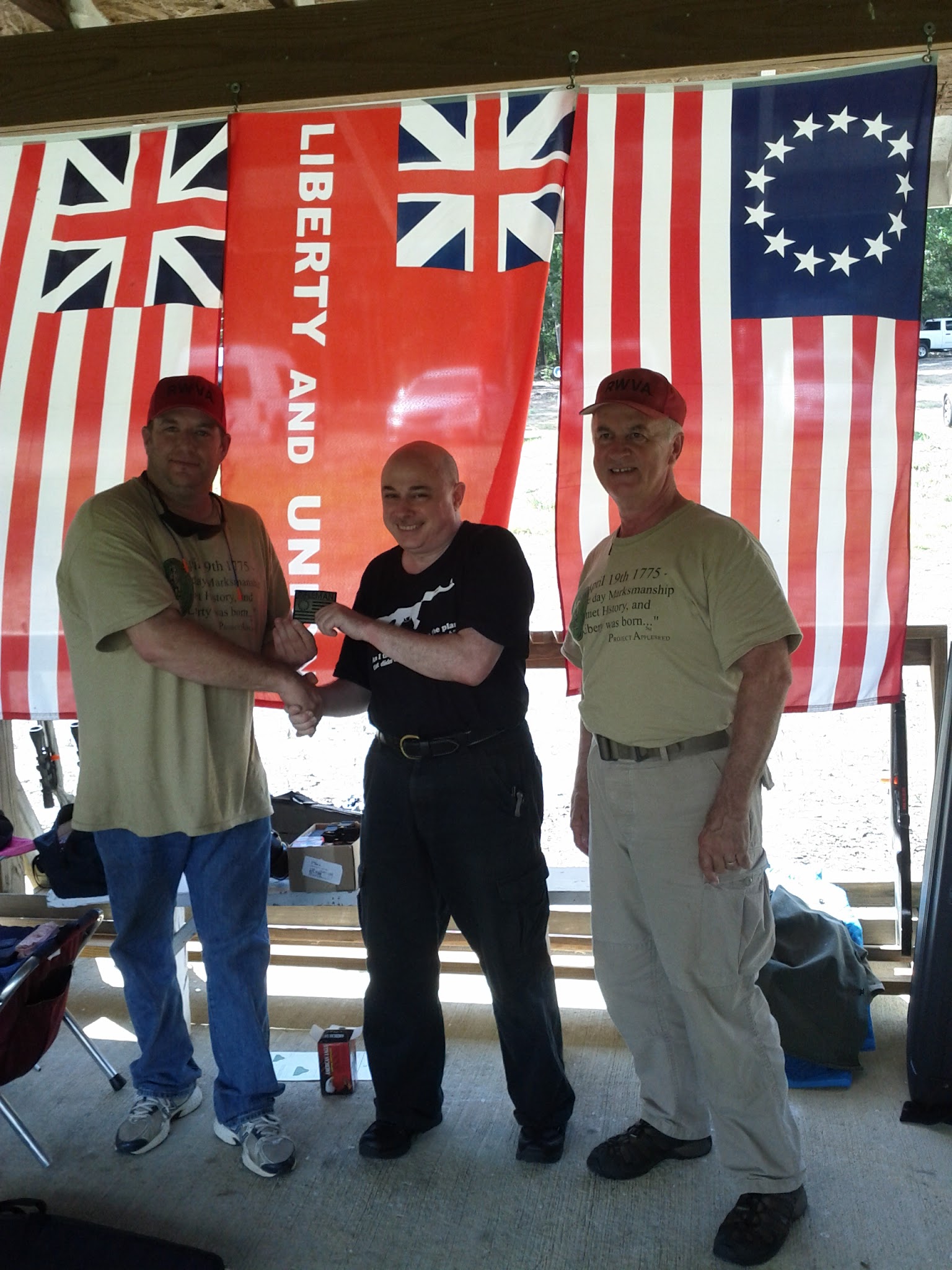 Given the issues I did have with my earlier attempts, I knew that I would be able to do this. So I was actually quite relaxed and not stressed about achieving Rifleman. The 10/22 is funny design. One fellow gunny has joked with me that the 10/22 is a fine rifle to take to an Appleseed because you get to practice malfunction drills real good. This turned out to be more true than joke. I got pretty good at detecting the stove pipes. You can’t see the brass sticking out because the bolt handle is in the way, but you also don’t see it getting flung out of the ejection port. At those times, I was able to simply pull the bolt forward and let the empty brass casing fall out and let go of the bolt handle and be good to go. If I didn’t catch it and pulled the trigger, it would go click, and I’d have cycle the bolt fully to re-cock the hammer, which would eject a good round. That meant time lost reloading that round in a magazine and doing another magazine change in order to complete the course of fire.

The Ruger 10/22 is one of those designs where you can get one that works flawlessly, every time, with every type of ammo, dirty or clean. But you can also run into one that, no matter what you do, it just won’t run consistently. I have one of the later. This one is about 35 years old, though the previous owner said he only shot it once and then put it in the closet. I’ve replaced a number of parts with Volquartsen replacements, and tried various adjustments with no luck. I will probably keep this rifle and when I have spare time, make some more tweaks to see if I get it to be reliable, but I don’t plan on spending a lot of money on it.

The upside of this, is that now that I know I can score Rifleman, with at least three FTFs, I’m sure that if pick up something reliable, I’ll be able to score even closer to 250. I don’t yet have a reliable .22LR semi-auto rifle, so I am in the market for one, and will possibly be looking at the Remington 597. I do have a Marlin-60 that is nice other than the fact it fires out of battery when the chamber gets gunked up, so I’m not going to be shooting that again until I have a gunsmith look at it. Plus, being a tube fed magazine, it’s a bit more effort to reload. Fine for hunting, but not so much for target shooting or events like Appleseed (though some shooters have, in fact, done that successfully).

Tomorrow we will be working on sighting in and shooting AQTs with centerfire rifles for those who took them (all of us, I think). I will be shooting my FN-FAL clone from DS Arms, the SA58 carbine. I also brought my Ishapore (Enfield 2A1 in 7.62x51mm NATO). I only brought Tula .308 ammo, so I’m going to check with range officers and read up on it a little before fire more than a few rounds through it. The Tula is supposedly a lighter load, so it should be okay, but I do want to be safe. I also just found this warning about steel cased Russian ammo in the SA58. Frankly, I get the impression that many rifle vendors recommend against it the way some recommend against any reloads at all. It’s a measured risk. The Enfield is an entirely different story, though, since it is a much older rifle.

So, even though I’ve shot this Tula through both my SA58 and my Ishapore, if you are reading this, please say a gunner’s prayer for me? Something to the effect of, “please don’t let this gun blow up in my face.” 😉